Veil is quickly approaching a landmark as changes to the Proof-of-Work aspect of consensus are soon to roll out. If you’re not yet aware of these changes, you can read here to get caught up.

Earlier, I had the pleasure of interviewing Kristy-Leigh ‘OhGodAGirl’ Minehan, a technology, hardware, and cryptocurrency mining icon, about ProgPoW and her assessment of Veil’s Proof-of-Work changes. 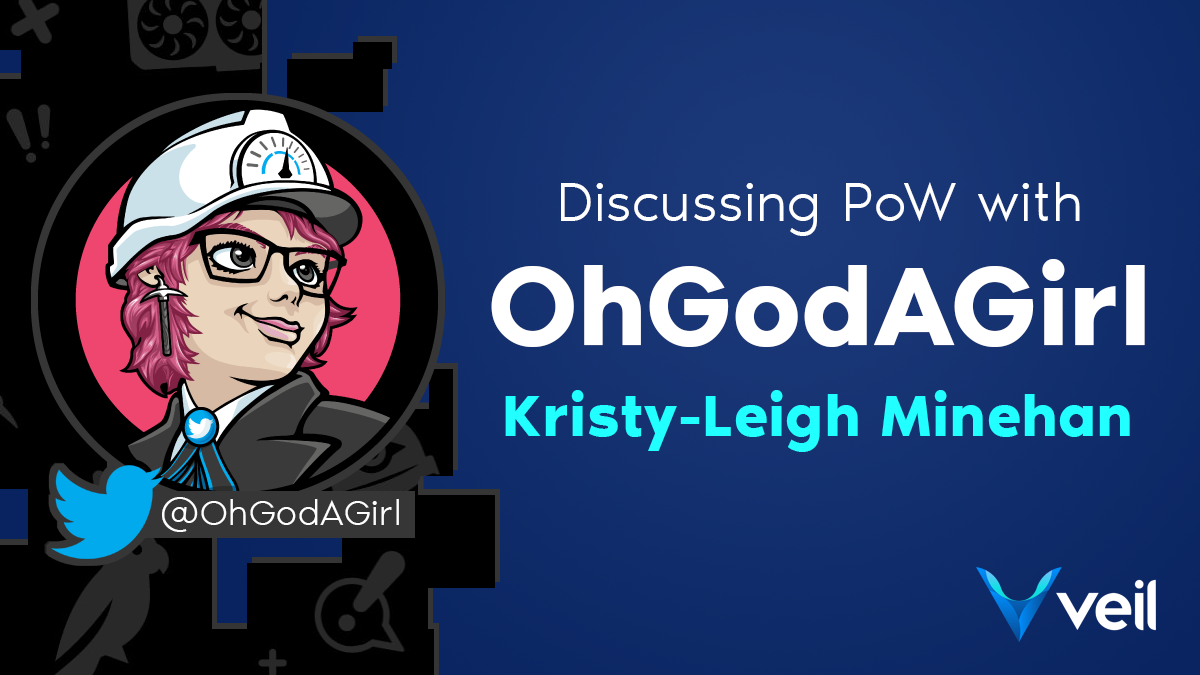 S: So Kristy, you’ve mentioned various pressures you foresee from mining changes taking place in the space…centralization coming about etc. I know this was primarily ETH-based, but I’m wondering about your feelings towards Veil’s new PoW model moving forward. I guess a key question I’d have is ‘Is ProgPoW a wise decision for a small project like Veil’?

K: ProgPoW will simply help to close any efficiency gap between ASIC hardware, FPGA hardware, and GPU hardware. For a coin that desires to be as uniformly distributed in terms of hashrate as possible, I believe it is a sound plan/model.

K: You have thus given a chance for even distribution of CPU and GPU hardware, as well as ensured a % of blocks are rewarded to stakers, allowing collaboration on multiple fronts for many parties/participants.

S: What makes ProgPoW a standout algorithm to you?

K: ProgPoW is simply to GPUs what RandomX is to CPUs (editor’s note: an algorithm specifically designed to utilize target hardware’s unique architecture). Both algorithms can, of course, have an ASIC be built—but that isn’t to be feared. What you want to do is ensure that the GPU or CPU can still compete with the ASIC, as opposed to what happens now, which is, of course, that GPUs and CPUs can’t compete.

People who would LIKE to upgrade to the ASIC can, but people who are not able to are suddenly not disadvantaged. Moreover, both RandomX and ProgPoW mimic their target platforms in such a way that you basically have to design an alternative CPU/GPU (editor’s note: to produce a specialized ASIC for the algorithms). That’s a great thing for the world.

S: Yeah, sounds good to me. Do you think something like that is the ideal future for mining?

K: I don’t have any opinions yet as I haven’t studied the matter enough with regard to economics or game theory. I think, in concept, it sounds sane—you weaken the ability of any one ‘hardware’ type to game the system.

But I don’t think it fixes the centralization issue—nothing stops one entity from hoarding all the hardware and doing whatever they like. That centralization issue, however, I think is out of scope for a PoW algorithm. All you can do is encourage the ability to be as decentralized as possible through your hardware choices.

I would say that I think you can also be unknowingly centralized as you can only have n-participants in your RandomX or ProgPoW ‘lanes’.

S: I see…It’s inevitable that people will try to gain whatever advantage they can—and I suppose why you mentioned game theory.

K: SOME people will. Never discount the psychology that has to come into practice: Most miners are super lazy (smile).

There may be some modeling that could be done to prove that a three-way split of rewards is actually more centralized because you can only have so many n-participants in each lane before it no longer makes economic sense.

S: So finding and maintaining balance is important for miner profitability?

K: Given that operating expense heavily impacts profitability and thus willingness to stay on the chain. Smaller projects like Veil, however, have a higher % of tribalistic miners: basically miners who are brought in on the vision and support the project regardless of the profit.

S: That support is a big thing to us, and something I’d certainly like to encourage.

K: You get it naturally by being a smaller coin.

Smaller coins don’t have the daily issuance to attract large miners, nor the liquidity or profitability—you attract smaller, hobbyist miners who are dedicated to the coin for other reasons. For some it is the socialization effect. For others, it is the enjoyment. For others still, it is the eventual ‘moon’ period. I fall into the first and third category—I have mined for the socialization effect, as well as the ‘moon’ effect.

S: I don’t mine personally, but all you’re saying resonates. I hope Veil’s mining will prove rewarding for miners in more ways than one.

K: By the way—I know Veil will get a lot of random users stating “OMG ASICS”. The reality is that most of the larger companies like Bitmain and Canaan are shying away from altcoins of any farm because the TAM (editor’s note: total addressable market) isn’t justified.

I would also state that I think PoW algorithms should be tweaked every X months, just like ANY other technical upgrade. This is a feature release (in my mind). People criticize Monero, but technical upgrades are a natural thing for ANY coin as new features develop.

For instance, Ravencoin has feature releases that force ALL node operators to upgrade.

You want to tweak your PoW algorithm to adapt with new hardware trends.

E.g. RandomX and ProgPoW may need to be adapted in 3-4 years when new hardware comes out.

S: I hear you. The longer it’s unchanging, the more likely someone finds a way to exploit it.

K: Not just that: hardware evolves. The goal of PoW algorithms like RandomX and ProgPoW is to ‘capture as much saturation of hardware as possible’. Thus you need to adjust the parameters according to hardware evolutions and trends. Everyone can still be on the same level playing field as a result.

The analogy is this: you don’t want your PoW algorithm to be centered around 10 year old hardware. You want it to be on the hardware that is commercially accessible to all parties—this is probably ‘current generation’ stuff. Older-generation hardware can still participate.

S: A bit of a case of ‘finding the sweet spot’ then.

K: Disclaimer: my thinking and observations change according to new input and data I get from activities in the real world. This pisses off many people, it seems (smile).

But my thinking now may change in three months. That should probably be stated. Apparently in America we call this “being hypocritical”.

S: Haha, well I respect that—if you’re so set in your thinking that new evidence contrary to your current beliefs doesn’t make you think again…well are you really even thinking?

I really appreciate your insight in all of this, so thanks for taking the time.

I hope you’ve enjoyed this peek into Kristy’s thoughts as much I did. Her knowledge in this area is rivaled only by her passion. You can read more from her by following her at @ohgodagirl on twitter.

If you’re interested in learning more about Veil’s upcoming PoW changes, feel free to drop in and chat with us on Discord, or reach out on social media.