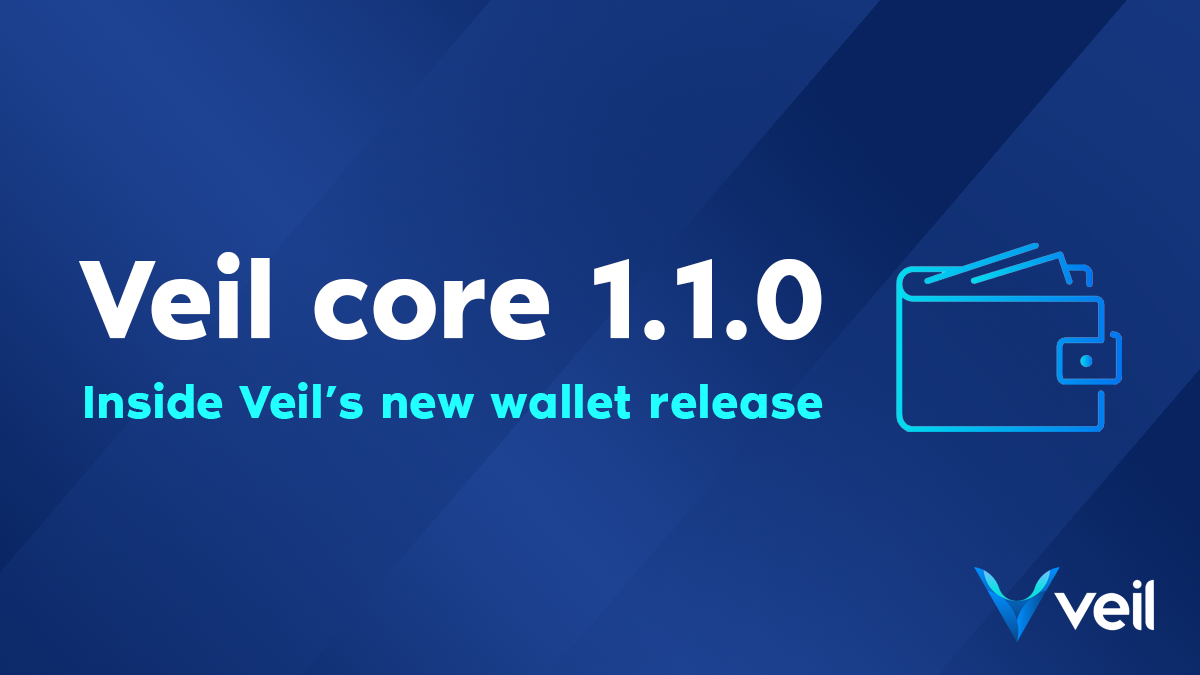 We’re pleased to announce the release of Veil core wallet version 1.1, the first significant version update for the project. This article provides an overview of 1.1.0’s features.

The most significant change to come with version 1.1.0 is the inclusion of a new consensus model. Previously, Veil’s consensus was split 50-50 between Proof-of-Stake and Proof-of-Work with X16RT. The new model maintains the 50=50 split, but divides the PoW half into ProgPoW, RandomX, and SHA-256D. To learn more about these algorithms and why they were chosen see this blog post.

Our friends over at WoolyPooly have provided us with a stable testing pool environment for ProgPoW miners to dip their toes into. No significant issues have arisen through this testing.

With the all clear on mining, Veil’s mainnet is set to hard fork over to the new consensus model on October 31st.

VERSION 1.1 IS A MANDATORY WALLET UPDATE! PLEASE UPDATE BEFORE THE FORK TO REMAIN ON THE CHAIN!

The latest wallet can be downloaded from Veil’s official GitHub account here.

Along with the consensus change, a large assortment of bug fixes, quality of life changes, and changes to the GUI are also included in this release. Following is a summary of what else you’ll find in 1.1.0. To read a thorough write-up, see the release notes on GitHub.

Orphans are discovered blocks that are submitted to the blockchain but do not pass consensus, thus do not become a part of the chain. Orphans are perfectly normal, as a part of competition in a healthy network.

While orphans are an expected part of a healthy network, the orphaned blocks stored in memory have a tendency to influence performance negatively when accumulating. Version 1.1 introduces a change to orphan pruning to improve operating performance.

Version 1.1 introduces quite a few RPC changes. Many of these are directly related to the mining changes, including the command to begin mining the various algorithms.

Some utility entries have also been updated, such as the ability to see a total balance with getbalance or view difficulties with getblockchaininfo.

Some optimization has also been made on some existing commands.

View the release notes for a list of all changes, or check Freshdesk for a full list of RPC commands.

Other changes have also been made such as the removal of the precompute toggle vestige from the GUI, bug fixes, and updates to some in-wallet text.

The move to version 1.1 and the accompanying renewed consensus model is something we’ve been eagerly waiting to release. We hope you find the additions and improvement to your liking, as a lot of work and care went into them.

Please ensure your wallet is updated to the newest version before the hard fork, and keep your eyes peeled for further information regarding the fork, mining, and opportunities for some free veil in the coming days.

Any questions regarding 1.1, mining, the fork, or otherwise are always welcome on Discord or social media.